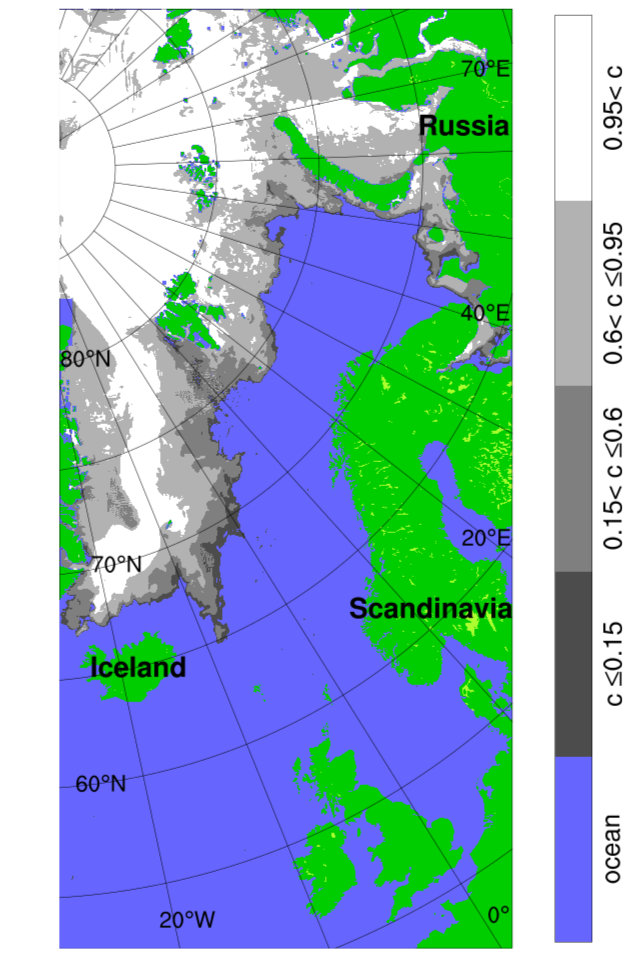 The SVIM archive is distributed on THREDDS. Results are available on a polar stereographic grid projection, with a horizontal resolution of 4 km and a vertical resolution of 32 layers. The simulation originally covered the period 1960-2011, and results have been stored as daily averaged values. The archive has subsequently been updated several times for later years, on a somewhat irregular basis.

The SVIM archive was originally produced in a project funded by the Norwegian Research Council. The project's primary objective was "To better understand how and why the survival of fish larvae varies spatially and temporally through their first months of life, and to quantify uncertainty in drift trajectories in ocean circulation models". The Centre for Ecological and Evolutionary Synthesis (CEES) was leading the project, while the production of the SVIM archive was performed jointly by project partners at the Institute of Marine Research (IMR) and Met Norway. The Regional Ocean Modeling System (ROMS) was used for this purpose.

The SVIM archive was configured with atmospheric forcing from a regional reanalysis which is a high-resolution downscaling of global reanalysis results from the European Centre for Medium-Range Weather Forecasts. Results from the Simple Ocean Data Assimilation (SODA) dataset were used for initial and boundary values. For sea ice, initial and boundary values were taken from a regional simulation. The sea ice model used is similar to the sea ice implementation in the configuration of SVIM. Tidal forcing was applied based on a global ocean tides model. Freshwater from river discharges was based on monthly climatological runoff values, modified to take inter-annual variability into account.
The results from the original SVIM archive was thoroughly evaluated by Lien et al. (2013). An analysis of results for currents (Melsom and Gusdal, 2015) revealed that the predictive skill for the situation at specific days are poor. Given the scales of a few km that dominate instantaneous distribution of circulation features, and the fact that there is no assimilation of observational data in SVIM, this is not surprising. It should be added that observations at these fine scales are lacking.
We also investigated the distribution of progressive vectors from model results and observations at selected positions. We concluded that the intensity of the Norwegian Atlantic Current in the vicinity of the shelf break is much too strong in the SVIM results. Elsewhere, the ocean circulation statistics given by the model results are fair to good representations of the observed statistical distributions.
Finally, we can add that the present sources for flow across open boundaries don't cover the most recent period. Consequently, monthly climatology for the years 2000-2008 from SODA has been applied after 2008. The corresponding situation for sea ice is that the climatology was computed from 2000-2007 results, and applied for the years after that period. Hence, inter-annual variability and trends are not described, and may give rise to discrepancies in the model results for years after 2007.
Reference:
Lien, V.S., Y. Gusdal, J. Albretsen, A. Melsom, F. Vikebø, 2013: Evaluation of a Nordic Seas 4 km numerical ocean model hindcast archive (SVIM), 1960-2011. Fisken og havet, 7-2013, 82pp.
Melsom, A. and Y. Gusdal, 2015: Evaluation of ocean currents from model simulations. MET report 14/2015, 30pp.
Lien, V.S., Y. Gusdal, F. Vikebø, 2014: Along-shelf hydrographic anomalies in the Nordic Seas (1960–2011): locally generated or advective signals?. Ocean Dynamics volume 64, 1047–1059.